The best coverage of the Blue Jays' Minor League system

The Buffalo Bisons scored four runs in the fifth and hung on to beat the Syracuse Chiefs 4-3 in game one of a double header.  Justin Germano started out strong, facing the minimum through four innings and just sixteen batters through five.  In the sixth, Germano was roughed up for four consecutive hits after striking out the leadoff batter and left the game still up 4-3.  Those four runs were produced by a big two out rally in the top of the fifth via consecutive singles to Jim Negrych, Anthony Gose, and Moises Sierra (bringing home Negrych), a wild pitch (bringing home Gose), walks to Mauro Gomez and Luis Jimenez and a two-run single to Ryan Langerhans.

Roster Notes:  Jeremy Jeffress was outrighted to Buffalo, but will be sent to extended spring training for work with instructors.  On the 15th, P Bobby Korecky was activated from the DL.

Blue Jays from Away Player of the Game: Justin Germano 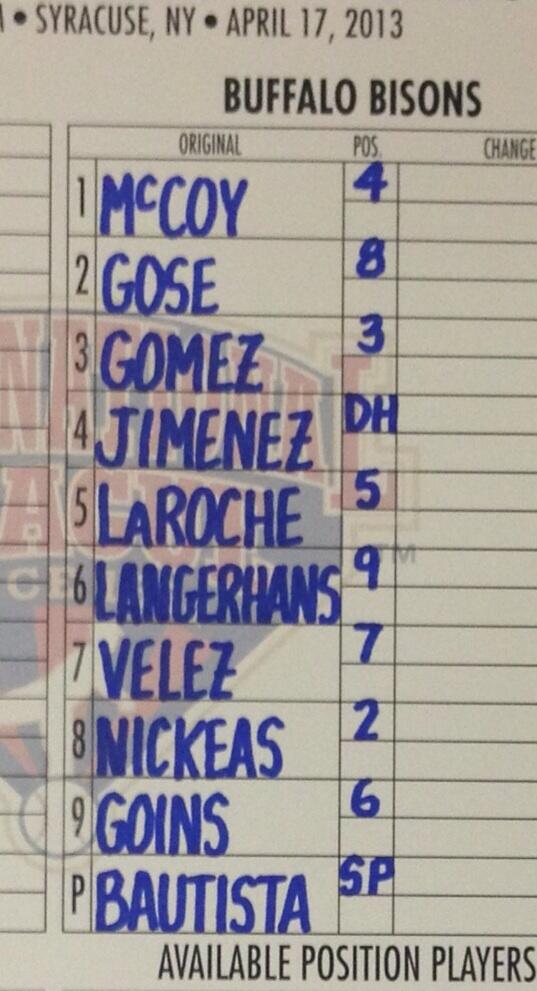 The Buffalo Bisons swept the doubleheader by winning game two in extra innings, scoring a go-ahead run in the top of the eighth on a Ryan Goins single to score Eugenio Velez (yes, that’s extra innings.  Minor league double headers are seven innings each).  Reliever Juan Perez came on to pitch a shutout bottom half to give the Bisons the 5-4 win.  Miguel Batista (although the lineup in Syracuse had him listed as “Bautista,” see above) had another poor start, but managed to pitch into the third inning this time before being picked up Mickey Storey, Brad Lincoln and Juan Perez who combined for 5 2/3 innings of 1-run ball.

On the offense, the hero of the night was Ryan Goins, who went four for four with two RBI (including the game winner) and a run scored.  He had a rough night on the bases though as he got picked off and caught stealing.  Mauro Gomez continues to mash as he accounted for two of the other Buffalo runs with a home run in the third inning.

Blue Jays from Away Player of the Game: Ryan Goins

It was as if the pitchers beat the hitters out of bed for Wednesday’s 10:35 AM start time for the New Hampshire Fisher Cats.  The game was 1-0 for the Fisher Cats until the 9th inning.  After tacking on an insurance run in the top, closer Chad Beck couldn’t get it done in his second inning of work and gave up two runs on four hits to send the game into extra innings.  When the dust settled, New Hampshire evened their record at 7-7 with a single off the bat of Clint Robinson (Tuesday’s hero) scoring Ryan Schimpf and a lock down inning from Tommy Hottovy for a 3-2 victory.

Blue Jays from Away Player of the Game:  Tyson Brummett

Starter Efrain Nieves was chased early, giving up seven runs in the second inning and the Dunedin Blue Jays were never able to come back, falling 9-4 to the Tampa Yankees.  Ajay Meyer relieved Nieves and gave up only a two-run home run to SS Ali Castillo in his three innings of work while Evan Crawford and Tony Davis combined for three and two thirds innings with both of them really impressing by registering eight strikeouts over the eleven outs they recorded.  3B Andy Burns had the big stroke for the D-Jays, hitting his second home run of the year in the fourth inning, while SS Peter Mooney had a three for four night with a double, the Blue Jays only other extra base hit.

Blue Jays from Away Player of the Game:  Evan Crawford and Tony Davis share the award.

Game postponed due to weather.

From the time they're drafted or sign their minor league contracts, all of the players in Toronto's system are Blue Jays from Away.

For questions or comments, email info@bluejaysfromaway.com